Urdu Hut
Admin
posted on 10 months ago
416
views
Arab News
10 people were injured in a fire at a Hermann railway station in Jeddah, Saudi Arabia. Four of them have been shifted to hospital, while the rest have been released on the first aid.

On the other hand, efforts are underway to control the fire at the Jeddah railway station. The Mecca governor said on Twitter that the ceiling of the station had caught fire. The Department of Civil Defense's ground and air teams are trying to extinguish the fire.

Fire control at the Herman railway station is under the supervision of Jeddah Commissioner Prince Mashal bin Majid, who is there along with his team.

Emergency has been declared in all the hospitals in Jeddah, said Dr. Samar Asra, Head of the Emergency Department at the Jeddah Health Department.

According to him, eight health teams are present at the railway station for medical assistance. In addition, teams of Hilal Ahmar are also providing assistance. 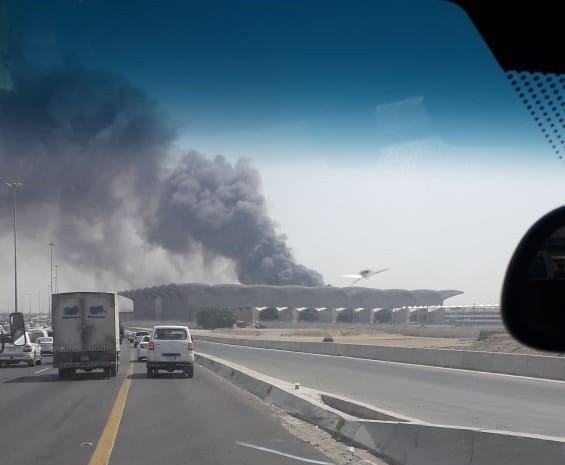 The cause of the fire was not immediately known, but the Hermann Railway Administration has announced to suspend all trains between Mecca and Medina.

The administration said in its account on Twitter that "all trains of Herman Railway are being suspended at present. Travelers can find information about the new table at the Free Toll Number. '

Efforts are underway to control the fire. Photo: Urdu News

The traffic department has said on Twitter that the highway coming to the area of ​​the railway station has been closed to facilitate the people's security and relief teams and people should take alternative routes.

Meanwhile, security agencies have appealed to the public to stay away from the area of ​​fire. Security agencies say the gathering of spectators near the railway station hinders the work of relief teams on one side and smoke on the other hand may affect people.

According to Reuters news agency, the video on Al Arabiya TV's Twitter account shows clouds of black smoke appearing from the train station and helicopters around it.